With all the talk of plastic and how we deal with the enormous quantities of waste which are non-recyclable, I feel the need to get ‘stuck in’ on the subject!
Taking an overview of the situation, it seems to me there are so many changes we could make globally, but governments just don’t seem interested. Is this because, by the time the damage to our planet becomes irreversible, the responsibility will belong to someone else? Or is it because they just can’t be bothered? I believe it’s partly both. But how can politicians not care about the future of the planet, especially when most have children and grandchildren?

They have a responsibility to make changes—and NOW; not over the next 25 years. And they must force manufacturers, retailers, restauranteurs, cafe owners and all those businesses which are churning out waste plastic day-after-day, to look at their levels of waste and work together to find ways to reverse the trend. The point is, we all managed before plastic was invented, but we have become brainwashed into believing that we can only buy items that are wrapped in attractive packaging—or food that comes in polythene or plastic containers. It’s ridiculous! 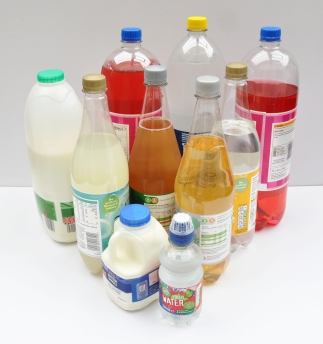 In part, Health & Safety, although good in some areas, has been directly responsible for many of the changes which have led to foods and other items being wrapped and in some cases wrapped again! A case in point: recently I wanted to buy four baking potatoes. My choices were, four in a polythene bag, four in a plastic vacuum-formed tray and a paper bag with a clear plastic front or four which I could select myself from a box of loose ones. I’m ashamed to say that, initially, I picked up the potatoes in the tray and bag until suddenly my conscience pricked me! I put them back and selected from the loose box and placed them in my trolley. They remained like that through the check-out, into my shopping bag and then home, where they were washed before cooking. No-one was ill and I was delighted not to have a bag to throw away!

Many years ago, in the late 1980s, my family and I visited my youngest sister who has lived all her married life in Mexico. Shopping there was a whole new experience for me. Specifically, when it came to fruit and vegetables—of which there was a wonderful abundance of virtually any type you could wish for. And the difference being that nothing was packaged. You made your selection, paid and took it home. I later saw my sister cleaning her fruit and veg in washing-up liquid, rinsing it well, then leaving it ’til she was ready to cook. I, of course, queried why she would wash her fruit and veg, and her sensible answer was that many people would have touched it on its way to the shop or market. So, just because our UK fruit is wrapped, does that mean it’s ‘untouched by human hands’? Very probably not. In which case, let’s have it offered for sale with no packaging—and we can then all be responsible for washing our fruit and veg before eating or cooking it. I always wash fruit or veg which will be eaten with the skin on, anyway.

Another problem with everything being packaged today is that we’re not building a natural immunity to many of the bugs and viruses that millions of us fall victim to each year. We’ve created a sterile environment which in itself is dangerous.

One idea would be to use the waste paper that the Chinese government has now refused to take from us, and turn it into paper bags, which in turn could be used in our shops and supermarkets. It’s not rocket science is it? And surely there are also some great business opportunities just waiting to be discovered.

The idea of a ‘plastic-free’ aisle in supermarkets is just about the most ridiculous suggestion I’ve ever heard! And what does it mean exactly? Because, if it means that everything in that one aisle will have no plastic packaging, then surely it’ll mean the manufacturers of all the items displayed in those aisles will have to produce goods without plastic around them? In which case, why can’t they do it for all of their products?

Another extraordinary solution that our government has come up with to aid the reduction of waste plastic is to tax all plastic carrier bags by extending the current 0.05p charge to include small businesses. This is also a ridiculous idea. If they really want to stop people using them and to bring their own bags, they should charge a hefty 0.25p per bag. Or, better still, stop manufacturing them altogether! Then we can all go back to using shopping baskets—just like our parents and grandparents used to.

It’s very hard, at times, not to hark back to the ‘good old days’. But, honestly, sometimes there’s just no option. In the latter part of the 20th century, household goods, clothes and food were priced according to what they cost to produce—plus a profit margin for the retailer. Everyone seemed happy with that set-up; paying what was considered to be a fair price all-round. And if an item stopped working or clothes started show signs of wear, there was always someone on the high street ready to repair it… sewing box at-the-ready! I’m no seamstress, but even I have darned a sock or two in the past.

However, suddenly in the 1990s—then early 21st Century, cheap goods started flooding in from abroad and it became clear that ‘make do and mend’ was becoming a thing of the past. Goods were so cheap it wasn’t worth the time or effort to try and repair them. And, worse still, some of the items—many made from plastic—were being packaged in plastic too! Attitudes seemed to change completely and, coupled with the new easier ways to borrow money, shopping became the new pastime, with most goods becoming disposable.

Today, I’m not sure that much has changed. I was shocked to hear on the radio recently, a presenter talking about removing the Christmas lights from his tree and trying to pack them away. He said that after 25 minutes of trying to untangle them he gave up and threw them in the bin—vowing to buy new ones next year. Pretty shocking!

While many of us are doing our ‘bit’, it’s hard to see the ‘wood for the trees’ when clearly there’s more than one mountain of waste plastic out there waiting to be dealt with. The government needs to pressure councils to work harder at educating us as to what can and can’t be recycled.

The advice we’re currently given is very basic. The council will issue a leaflet each year with the collection days listed, and it offers us a rough/general idea as to what can be put in the recycling bin. However, there are so many items made from multiple materials which, in theory, makes them non-recyclable. But how are we to know?

I think there should be a national plan for recycling, funded by the Department of the Environment, and every council should have to follow those guidelines. It would be easy to administer and greatly reduce the amount of landfill. The government should also make it law for all manufacturers to state on their packaging whether it’s recyclable or non-recyclable. So many of the items I buy say ‘check local recycling’—and you can’t! It’s simply ‘passing the buck’.

In one form or another plastic is used across the world in almost everything that is made, but does it need to be? In some cases it can be argued that ‘yes it does’—and there are enormous benefits to the manufacturing of a large number of the items that we’ve become so accustomed to using every day. Many of these types of plastic are recyclable, which is great. But there are also many that aren’t—and this needs to change.

Globally, we need to unite and make some major changes to how we live our lives—working together to help protect our environment for future generations.

One thought on “PLASTIC – CAN WE LIVE WITHOUT IT?”