RECENTLY I read on Facebook about a Bristol mum and her family who had booked an Easter holiday weekend at Pontins, Brean Sands in Somerset, England.

When they arrived they had to wait two hours to access their accommodation, but it was so disgusting they ended up choosing to walk away and scrap their plans.

Not before complaining, of course. But to no avail, because Pontins simply don’t care. They’ll sell you accommodation based on photographs on their website, which are not of the accommodation you are buying. Then, when you complain, they’ll always find a reason NOT to refund your money.

Their first cop out, while you are still on-site, is to offer to clean the room. I think it should be a given that accommodation is clean and up-to-standard when you arrive. Clearly they don’t!

Then, when you ask for a full refund, they say you’ll have to go through their complaints procedure which takes 28 days. Which is a joke!

I know this because my daughter, her partner and two children booked at Prestatyn Sands in Wales last August and had exactly the same experience. I’ve seen the photos and to describe the accommodation as disgusting would be putting it mildly.

There was broken furniture, curtains hanging off the rails, old stained mattresses and quilts, a filthy bathroom and the stairs and decked walkway to the room was like a rubbish tip. 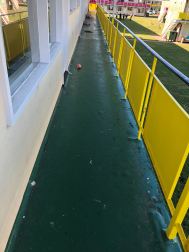 They’d also paid for the meal package and, in total, had spent just under £400.00 for four days.

Pontins did suggest they’d refund the £180.00 for the meal package, but only on the proviso we didn’t pursue any further action for the accommodation. As I understand it, they’re not legally entitled to do that.

After a long, tiring journey, my daughter and family were upset and angry to find that what was on offer was not what they’d paid for.

They waited in a lengthy line of other guests who were also complaining. The reception staff offered nothing other than to clean the room, and said they had no other rooms available. The manager was seen cowering in a back office behind the reception—rather than coming out to confront his angry guests.

My daughter and her partner deemed the room unfit for use and made the decision to return home, despite being very tired and bitterly disappointed.

Having made the complaint via email—as Pontins requested—then  following up in writing to the Chief Executive and their Sales and Marketing Director, there was essentially no response from them. They simply acknowledged they’d received the complaint and said they would respond within 28 days.

We then spoke to Trading Standards, who advised us to go through Resolver, an online mediation service—but again we had no response.

The next option was to go through the small claims court. But up against a large  company it can become costly, and it didn’t make sense to throw good money after bad.

Finally, there was ‘chargeback’ through the bank, which initially looked promising—yet again Pontins found something in the fine print, which meant the bank wouldn’t pay out.

I’m writing this because clearly there are many other people who are also being misled, ripped off and cheated by Pontins and their owners, Britannia Hotels.

This group needs to be named and shamed. They don’t care about their guests or about providing adequate and habitable accommodation for families, most of whom have saved all year for their holiday, only to have their dreams shattered.

Pontins and Britannia appear to have no business standards or morals and so far are getting away with what can only be described as ‘daylight robbery’.

They mustn’t be allowed to continue in this way and, have no fear, I’m on the case and fully intend to take them to task.

In the meantime, with the holiday season coming up, I can only suggest that you steer well clear of Pontins, wherever they’re located. They are bad news, and you’ll only end up being disappointed and out-of-pocket.

Only by protesting will we spark a change for-the-better—and doing so with our feet and our wallets is the best way forward.

I’ll keep you updated, so watch this space.